A while back my friend R. & I decided I would make the 6 hour drive to visit her for a weekend and during that weekend we would have an "Autumn Extravaganza". A weekend which would include wearing cute fall outfits (leggings, boots, scarves and sweaters), drinking seasonal caffeinated beverages and evening strolls.

I arrived Friday evening and we were both pretty tired, me from a long day of driving and R. from her long week of doing her teaching internship. So we made a list of all the things we wanted to do over the weekend, watched Grey's Anatomy and spent some quality time catching up before we called it a day.

Saturday we got up, got ready and headed downtown to the Farmer's Market. Our first stop was a local cafe for coffees to sip on while we browsed the booths. Neither of us bought anything but it was fun to look. Next up we headed to a walking trail and went for a fall stroll. It was actually pretty warm out and by the end of the trail we both admitted we were a little overdressed.

That afternoon we headed to an Apple Orchard. I've been to plenty of pumpkin patches but the apple orchard was a first! We picked a bunch of apples, including the one pictured below which came off the tree with the perfect stem and single leaf still attached! We used some of the apples for apple pancakes Sunday morning and they turned out delicious! 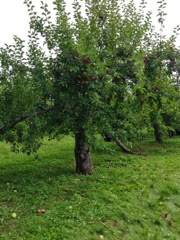 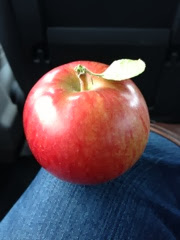 Sunday we headed into the city for a quick trip to the mall. I ended up getting a shirt on sale for $5 which was exciting but my quest for a perfect plaid shirt was unsuccessful. We headed to Chapters and picked up another caffeinated beverage to sip on while we browsed. I could spend an entire day in Chapters looking at books. I settled for two books in a series and can't wait to start reading them!
Sunday evening we at supper watched The Amazing Race and enjoyed our last few hours together. 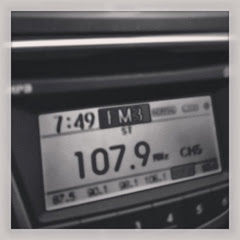 I headed home early this morning. R. had to be in school by 8 so I was on the road by 8! For the first hour of my drive I got to listen to a local radio station which plays the most ridiculous selection of music. We listen to it whenever we're in the camp car so I couldn't help listen to it when I had the chance. This morning it played country, 50s pop and disco!

I made it home safe & sound early this afternoon and now I'm relaxing in my sweat pants!