I jumped on the scrapbooking bandwagon pretty early in life, I don't remember exactly how I got started but I know that there is a stack of Scrapbooks documenting my junior high self. And yes, there are just as cringe worthy as you imagine. In high school Facebook made it's debut and I was a little more focused on making sure my Facebook albums were up to date than I was about creating scrapbooks. My high school years are documented through boxes of photos and 'stuff', maybe someday I'll feel inspired to put it all into albums but that day is not today (or tomorrow...and probably not anytime soon). In university I didn't take a whole lot of photos. I do have a Smashbook from my fourth year and I've got some traditional photo albums filled with camp photos. Post university life I pretty much stopped taking photos because I didn't feel like I had anything to take photos of, except for camp. Camp is the exception, my camp life/career is fully documented each summer has it's own album and/or box of memorabilia. A year and a half ago I got my DSLR and (re)discovered a love of photography. And now I find myself identifying as one of those people with thousands of photos on their hard drive without a purpose in life other than to pop up when my screen saver comes on. 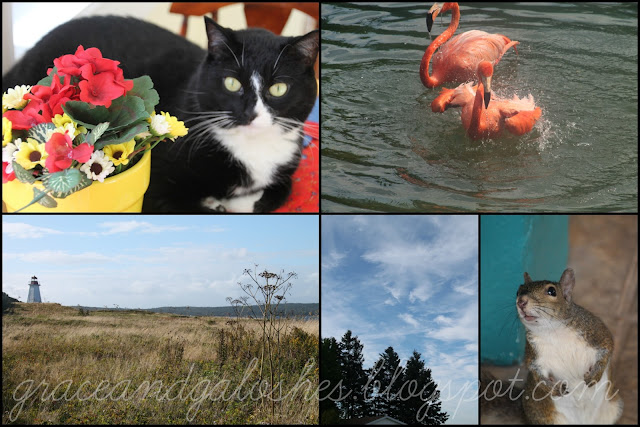 I know I need to get a handle on the situation before it gets even more out of control but I don't necessarily want to spend hours meticulously cropping/cutting/pasting/embellishing two photos at a time. And so I've decided to hop on the Project Life bandwagon. I've happily waved as the PL Bandwagon passed by the past few years but I never felt like joining. I've even invested in some PL supplies when I've seen them discounted at Michael's. The journalling cards made a great addition to my Smashbooks, I used the bright patterns for card making and they are the perfect size to write a quote on and include in a package. They were also perfect for writing warm fuzzy notes to counsellors this past summer. I guess you can say that I had the Project Life Bandwagon on speed dial but hadn't bothered to call and make a reservation.

Until now. After a lot of in-depth research courtesy of Pinterest I've decided to jump on the Project Life wagon. At first I really liked the idea of following the Project 52 formula, a two page spread every week of the year. Then I did some more reading and realized that's not really what I'm interested in doing at this point. I'm not going to invest in a fancy printer to print my photos at home and I'm not going to order prints every week so the Project 52 formula isn't really going to work. I still want to keep life in chronological order and "document the everyday" but I know that some weeks won't really be all that action packed. So I've decided that my formula will keep Project 52 in mind, but focus more on the month than the week. I'm confident I can commit to printing photos once a month and carving out a Sunday afternoon (or two) to document them in an album. In fact, I prefer to scrapbook in large chunks, I don't think I would enjoy just doing a page at a time. And enjoying what I'm doing is very high on the priority list.

Like all scrapbookers I have a sizeable stash. I wasn't about to purchase a whole lot of new supplies but I did let myself buy a few new things in preparation. First up I wanted a Project Life Album, I ended up with two because they were Buy 1, Get 1 Free. I will use one for 2016 Project Life and the other I will either save for later or I'll use it as a traditional photo album for photos that I don't want to include in the Project Life album. I know it won't go to waste. I used a 50% off coupon to buy a core kit. I decided to invest in the Seasons kit because the cards are made to go through the entire year. There's a few for each holiday and I know that they all coordinate. I know I'll supplement with the cards from other kits I own and make my own cards but I like having a core kit to set the theme. And of course I needed pocket pages so I used another 50% off coupon to buy the variety pack. Which gives me everything I need to dive into Project Life in 2016. I also ended up buying the Kraft Edition Core Kit because I happened to find it at Winners for $20 and I just couldn't pass up that kind of deal. When I got it home and went through the cards I realized it would make a perfect camp album. So we'll see what happens.

I am eagerly awaiting January 1st when I can convert all my enthusiasm into creativity. Until then I'm going to stalk the Project Life blog and admire Kelly Purkey's amazing memory keeping skills. Is anyone else a Project Life convert for 2016 or a long time fan of the memory keeping system?

I was saving this post for later on in December but Becky announced this morning that on Thursday Creative Live will be broadcasting 18 hours worth of Project Life 'how to' for free! I know Thursday is Thanksgiving for those of you in the US but you might want to check it out post turkey dinner and for those of us not in the states know you have your Thursday plans!

**It's worth noting that Becky Higgins has no idea who I am and what my opinions are on her products. I bought all this stuff entirely by choice with my own money. I'm just spreading the love because I believe in documenting life.
Posted by Donna at 9:36 am