I've had an unexpectedly long to do list this week but most of the things on my list have been fun things or at least things I want to remember so today's post is going to contain a whole lot of seemingly unrelated things, a "menagerie" if you will. Fun fact: menagerie is my third favourite word.

I'm a bit of a Halloween grinch. I hate anything gruesome or violent and as a general rule I don't like being scared. I do like pumpkins and candy though so I tolerate the "holiday". I planned to spend Halloween helping J. pass out treats at his house. Now, before I tell you my tales of Halloween it's important to note that J. and I are complete opposites in a lot of ways and the story of our first Halloween together really demonstrates that fact. I had made treat bags for my parents' house Monday and they were all organized and ready to go in our spare bedroom. Saturday afternoon at 3:30 as I was leaving my house J. messaged me to say he was busy at work and asked if I could stop and pick up Halloween treats for the trick or treaters on my way to his house. I was not impressed. And so I found myself at the grocery store in search for Halloween treats at 4:00 p.m., exactly an hour before trick-or-treating started. This is not the way I live my life. I managed to find some candy and hurriedly put it into treat bags just as the first tiny jedis came to the door.

And then I experienced my first city Halloween! It was weird. I'm from the country and around here the houses are far apart and there's no sidewalks so parents drive kids from house to house and since there aren't all that many kids you pretty much get a treat bag at every house containing a can of pop, a bag of chips and a handful of candy. I looked out J.'s front window at 5:15 and there were just kids everywhere walking up and down the street. When all was said and done there were 60 trick or treaters (which apparently is pretty low)...J.'s parents live in a newer subdivision and they had close to 100. It's a big year when we hit 25 trick or treaters and my parents'....and 75% of those kids are cousins. We spent the rest of the evening eating wings and watching hockey while I recovered from the Halloween hoopla. 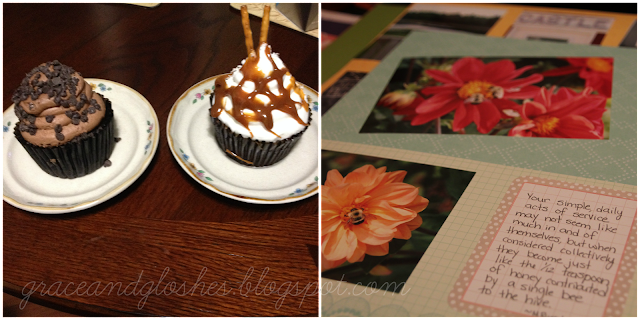 Yesterday was J.'s birthday so we had dinner at Swiss Chalet with his parents and then we had cupcakes back at his house. The cupcakes were a bit of an afterthought but he assures me it was a good birthday regardless. I've been working on finishing my summer smashbook and realized I am pretty satisfied with the way it's turned out. I made more of an effort to add journalling beside all those photos and it was the perfect way to incorporate Project Life cards and since I used cards from one kit it helped make the whole thing flow together.

Today everything on my to do list can be done wearing yoga pants which is really the best kind of to do list. Going out into the world basically means being bombarded with Christmas and I think one of my biggest pet peeves in life is Christmas decorations in November. Christmas belongs in a box until December 1st, unless you're doing some advanced Christmas shopping and even then I'd argue shopping for a gift does not have to involve Christmas carols blaring form store speakers. I'll stop myself now because I know I'm in the Christmas minority on the subject.

So with that I'm off to make a cup of tea and settle in for a productive afternoon of Spark planning and catching up on shows.
Posted by Donna at 1:50 pm