{one}
It's no secret that 2016 was not a good year for reading for me. I set out to read 52 books this year and  just finished my 8th. I'm attributing part of this to the fact that last December I got a new phone and never got around to downloading the OverDrive app, which is what I had been using to access ebooks from my library. Earlier this week I re-downloaded the app and I've already finished one book with a dozen waiting in my queue. Here's to many more hours spent reading actual literature and not browsing Reddit.


Me & My Big Ideas released a whole bunch of new sticker books for the Happy Planner this week and I'm itching to get my hands on at least two of them. I already have two and I am kind of in love with them. They are the perfect blend of practical and cute, I'm eagerly awaiting the week of December 26 when I can start using my 2017 planner. I am having some regrets about my choice of Happy Planner, I'm thinking I should have held out and went with the coil bound Erin Condren knockoffs by Recollections? (I love the look of the ECs but in order to get one from there to here I'd need to spend about $100 and there's no way I'm spending that kind of money on a stack of paper.) But what's done is done and I'm sure I can work with what I've got for the year.

I didn't hear anything this week about making it through to the second round of interviews...so I'm not really sure how to interpret that one. It seems strange that I wouldn't get an e-mail indicating it was a no thanks...but they also indicated they were planning on doing second round interviews on Friday (today)...so I'm really shrugging my shoulders on that one. There is another posting for a job that isn't camp related, but is much more closer to home and sort of in line with my skills. And maybe that will be the ticket? Ugh.

I've been debating about choosing One Little Word for 2017. I know I won't be officially signing up for Ali Edward's class this year, I don't need to spend $40 to chose a word. I wasn't overly interested in the community and I would be fine with using the same monthly prompts from this year. The words that have been rolling around in my head are 'Still', 'Calm', 'Whole' and 'Spark'. I'm not feeling particularly passionate about any of them though. In years past I've chosen Love,  Brave & Rise. Do you choose a word for the year? If so what do you do with it? 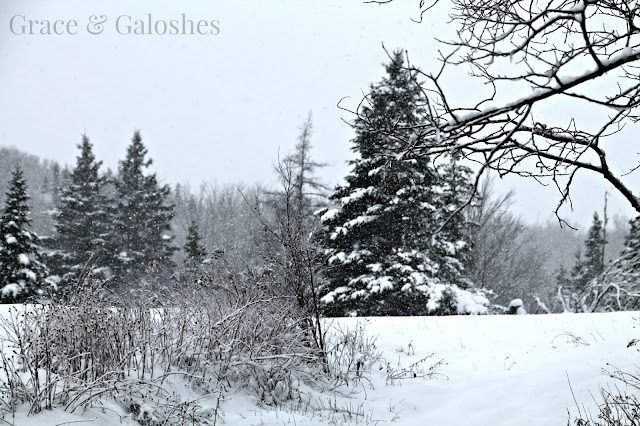 It started snowing on Sunday and hasn't stopped all week. It's -20 out with the wind and it's not even winter yet. This is not a Friday favourite, but it does seem to be a fact of life.


{six}
In the spirit of 'out with the old, in with the new' I've been cleaning up my blog routine. I've gone through and deleted a bunch of draft posts because let's be real I was never going to finish that 'Friday Five' from 2013. I've also been cleaning up my Blog Feed, unfollowing some folks who I never read anymore or who haven't blogged in more than a year. Which, side note, am I the only one who feels sad and immense curiosity when bloggers who I followed for years stop blogging? There are about half a dozen that I just can't bare to 'unfollow' because I still have hope they'll reappear one day and I don't want to miss that. It also means I've made room for some new bloggers. So who are you following that I need to check out? I would love to find some single, late twenty somethings like myself but I'm as long as every post it's trying to sell me something or tell me how to build my blog followers I'm open to any suggestions.

Linking up here and here.
SaveSaveSaveSave
Posted by Donna at 9:34 am