I finally watched my first Christmas special this week. Let it be known that Merry Christmas, Mr. Bean is the movie that finally made me feel a twinge of holiday cheer. I know not everyone is a fan but the whole opening scene where Mr. Bean is playing with the nativity makes me giggle every time. 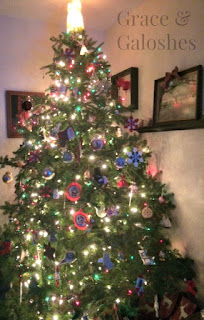 Our Christmas tree went up on Sunday and for the first year since Peyton was a kitten we put the nice ornaments on the tree! I'm not sure how many NASCAR and hunting ornaments are allowed on a tree before it becomes a Jeff Foxworthy joke, but I'm pretty sure we are at that threshold. I haven't gotten around to taking any proper photos so the oddly light iPhone photo is going to have to do for now.

{three}
Yesterday I posted about my plan to combine One Little Word with my 52 in 52 list to tackle one word each week of 2017. I'm super excited about it, even though I'm not entirely sure how it will play out. I'm just excited about all the potential!

{four}
I made Peanut Butter Balls for the first time... 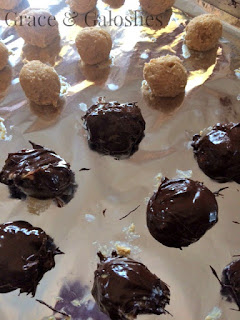 Please tell me that there is some easier way to get the chocolate onto the peanut butter balls. Without exaggeration I was covered in peanut butter and chocolate from head to toe, along with the kitchen and pantry and everything in between. I used this recipe as a guideline, but I halved it. It turned out really good, they taste just like I wanted them to taste but they are not going to win any beauty contests. I'm thinking the secret might be to freeze the peanut butter balls and then cover them in chocolate? I rolled them and let them hang out in the fridge for an hour but it didn't seem to make that much of a difference.

{five}
I could have sworn I had a photo, but apparently not. Regardless, I'm devoting my last favourite of the week to Root Beer Floats. Root Beer was on sale this past week so I made it my 'I survived Christmas Grocery Shopping' treat. And then I got home and realized there was vanilla ice cream in the freezer. If I'm lucky enough to have kids someday I'm probably going to go ahead and convince them that Santa enjoys Root Beer Floats & Potato Chips more than milk & cookies.