This weekend was originally supposed to be jammed packed with fun. I had a sleepover at a historic site with the Rangers on Friday night and then a fall camp with the Sparks/Brownies on Saturday night. Then it was discovered some paperwork wasn't completed for camp so that was cancelled and since the forecast was calling for another rain storm the sleepover was moved to Saturday...but then the forecast changed again and the sleepover was cancelled all together. And just like that my weekend was wide opened.

It was fairly stormy out on Friday night and Saturday and it ended up being good motivation to start a new puzzle. It's been far too long since I finished a puzzle and a big part of it is the cats have a tendency to steal pieces. The one I'm working on now is small (only 300 pieces) so it's a quicker process and I can cover it up with a large placemat that sort of prevents cat interference. 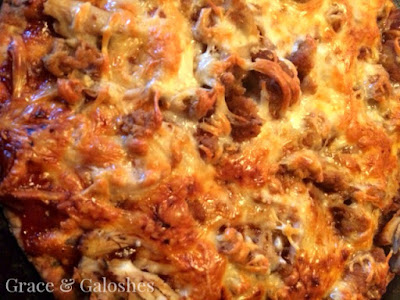 Saturday I did some pizza experimentation and was super happy with the results (even though it didn't photograph well). There were some left over wings in the fridge so I took them off the bone and used them as a pizza topping. I mixed BBQ sauce and hot sauce for the sauce, added the chicken, topped it with cheese and 15 minutes later I had delicious pizza. I've started thinking about my 52 in 52 List for 2017 and I think one of the things is going to be make 12 different kids of pizza. 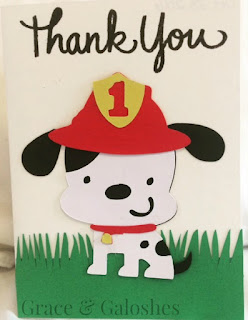 Sunday I spent more time working on my puzzle until it was time to head to Sparks and whipped up a quick thank you card for our meeting. Since we had to cancel camp we wanted to do something a little extra special with the girls to negate the disappointment so we headed to the fire department for a tour. The girls got a chance to try on gear and sit in the trucks and it was super adorable.

It was far from the weekend I had originally planned and I was/am pretty disappointed all of those fun plans got cancelled, but it was probably for the best anyway since we did get a lot of rain. Next weekend my plans are still up in the air, originally I was supposed to go celebrate 'Friendsgiving' with H. & R. but the long term forecast isn't great and it's a long drive plus I need to be back pretty early on Sunday so that I can get ready for our Spark/Brownie Halloween party. Which reminds me that at some point this week I need to make a tutu.

Linking up with B Loved Boston.