With 2014 only a few days old BlogLand is full of bloggers making resolutions and setting goals (myself included). There are also a lot of articles like this flying around the internet. Tales of men and women committing themselves to doing one thing for an entire year. Some of them are fascinating to read others just confuse me, because...why? These types of challenges aren't new. (One of my favourite books is The Year of Living Biblically by AJ Jacobs.) It got me thinking about what I'd be willing to commit to for a year and I came up with some options that if I was awarded a nice little book deal or cash incentive or was just really bored with life I could totally commit to for 365 days. 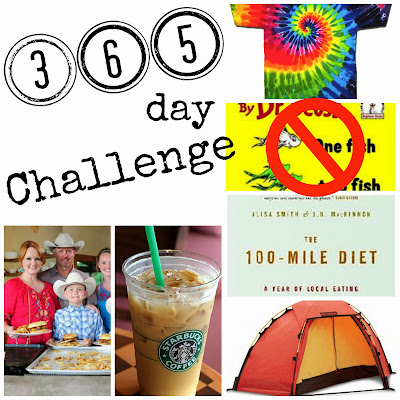 Wear Only Tie-Dye
Thanks to years of camp I already have one full "outfit" (pants, underwear, t-shirt, sweatshirt, headband, shoes) plus a ridiculous amount of "spare" t-shirts. If some sort of semi-formal occasion occurred I would be more than happy to put my tie-dye skills to use turning my white sundress into a colourful ode to hippies everywhere.

Drink Only Coffee Based Beverages
I almost said "only drinking pop" but then I thought about how nice a hot cup of coffee feels in my hands on a cold day and changed my mind. Coffee Based Beverages on the other hand can be hot or iced, perfect for all seasons. Plus, I'd be so hopped up on caffeine that I'd have tons of energy to go for runs and get stuff done.

Speak Only In Rhyme
Just Kidding. That would be funny for an hour tops.

Follow The 100 Mile Diet
This one that I legit want to do, it's on my 25x25 list to follow the diet for a least a week. I would definitely need somebody to do it with me, or being living on my own because it would just be too much to tackle alone in a house with other people who weren't doing the challenge. And things would be pretty rough in the winter, but it's still something I think about often.

Try All of The Pioneer Woman's Recipes
We all know about Julie & Julia  but what about Donna & Ree? I could spend a year of my life mastering her famous cinnamon rolls and perfecting pot roasts (I actually don't like pot roasts but whatever). The more I think about this plan the better it sounds. Would I get bonus points if I figured out a way to make all her recipes using 100 Mile ingredients??

Sleep Outside
This would get dicey come December-March (especially in my current locale), but it's totally doable. I have a pretty high quality sleeping bag already, I would invest in a small winter tent and with enough layers I'd be nice and toasty! The questions that would arise from the neighbours would be interesting. My warm sleeping bag and winter tent would only do so much when there is 200 cm of snow down and winds are gusting 120 km/hr. Maybe this is a challenge better suited to someone in a warmer climate.

I just realized most of my challenges involve food. This is probably a sign I need to go eat something. I'll leave you with the question: What ridiculous thing would you be willing to do for 365 days?