I mentioned SMASH* books a few days ago in this post and since then I've gotten quite a few comments and questions about them. Since they are one of my favourite things I decided to make a post to share some pages from the books I've completed. 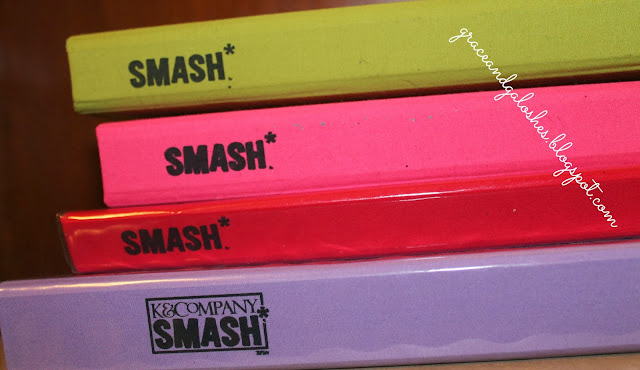 I used the Pink "Pretty Style" book to keep things from my last year of university. To be honest I wouldn't even say it's 100% full. I keep meaning to take some time to stick in a few more things I have kicking around my room but I never seem to actually get around to doing it. There aren't very many photos in this book. It's full of ticket stubs, random things I cut out of magazines, quotes, notes and cards from friends. 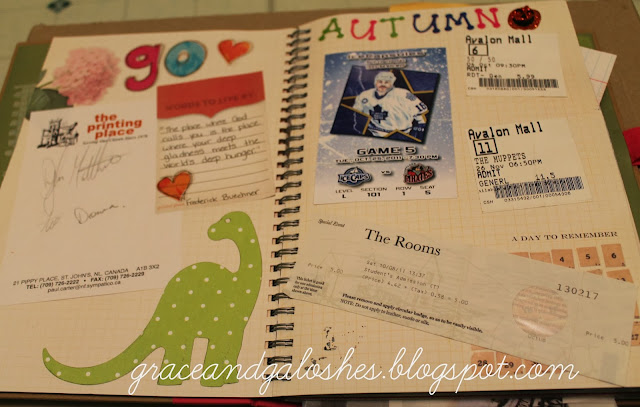 This page is full of movie stubs, a favourite quote, a random dinosaur that I liked and an "autograph" from a friend. (Just in case he ever gets famous.) 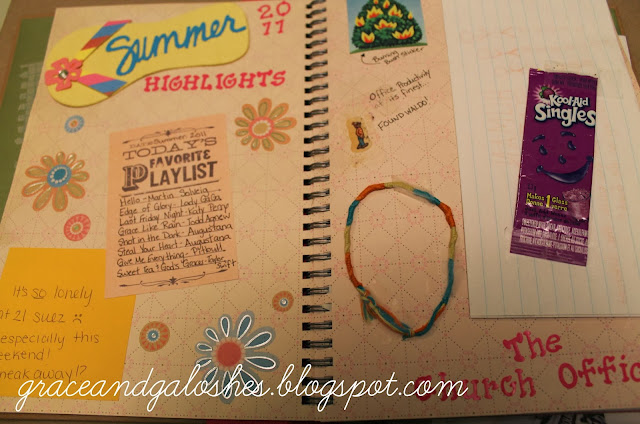 On these pages I taped in a friendship bracelet after it had fallen off, a list of the songs that we listened to on our drive to school each day, a post it note from my roommate and a letter from a friend that she wrote me to read while on the plane for a visit home at the end of the summer.

The second book I did was "Eco Style" it was perfect for camp! I had planned on using it during the 2012 summer but in the end I just put all those photos in a photo album. I knew I had to use it for the summer of 2013. I was much more intentional about taking photos and saving things. I brought the book and a rubbermaid container full of scrapbooking supplies with me to camp with the idea to do complete the book as I went, working on it during breaks and pasting notes at the end of each day. I should have known better than to attempt that though, I didn't do a single page over the summer. Instead once I got home from camp I printed all my pictures and spent almost a month working on the book.

In the end I'm really happy I waited until the summer was over to build the SMASH book. It was a wonderful way to reflect on the summer, remember the good times, move on from the not-so great times and I had time to really make the book what I wanted! I'm really happy with the way it turned out! 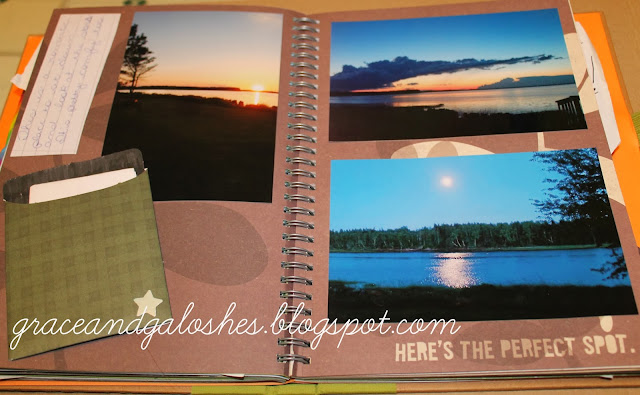 These pages are extremely simple, but I love them. I glued in my favourite pictures of sunsets and the moon over the river and added in a pocket where I put a particularly special note. On the side is a clue that was part of a scavenger hunt my secret friend made me one day. The clue is about a romantic spot to stargaze so it fit in with these pictures perfectly. 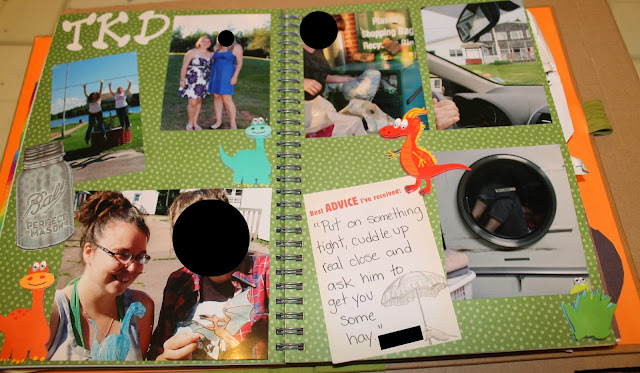 Back in my scrapbooking days these pictures would have all been cropped into straight lines, backed with coordinating card stock and arranged in parallel lines on a 12x12 piece of paper. Now they just got cropped into whatever shape made the most sense and allowed them to fit on the page. I threw in some dinosaur stickers as part of an inside joke and a particularly hilarious quote from the summer and that was it!

I had originally planned on including more pages but I had a really hard time taking good photos. And some of the pages I took photos of lost a lot of their splendour once I very unsophisticatedly edited out people's faces.

I've always been into scrapbooking but stressed about making everything "perfect" with the SMASH* books the point is literally just to smash it all in. Sometimes I organize my thoughts and create pages that do have layouts like you would see in a traditional scrapbook. Most of the time I just create a pile of things I want to include and stick it in where ever it fits! I have two more blank books that I'm not quite sure how to use. I really like the red one and have been saving it for "something special". (Saving nice things for special occasions is a habit I really need to lose.) And the purple one I bought during a really good sale and I was looking through the pages the other night and decided it would be perfect to use if my whole Texas plan happens.

If you're someone who is a "saver" like me and hangs on to little notes and ticket stubs but has no idea what to do with them I really recommend this method. You can stick pictures along side your "stuff" and at the end of the day you create something totally unique that gives you just as much satisfaction as a scrapbook without the stress.

**I was in no way, shape or form compensated for sharing this product on my blog. It's just something I happened to learn about, buy and totally love!
Posted by Donna at 1:07 am