What I Learned From My First Year of Project Life

I set off this year to do Project Life on a monthly basis but then decided that during the summer I would make a separate album for camp and document each session individually,  so I inadevetrly got a taste of two of the most popular methods. I really like the weekly method and it worked perfectly for camp. I don't have a significant other, children or close friends that live nearby my life isn't that exciting so I'm not sure that weekly is the answer for the full year but I am tempted to give it a try. There's also the logistics of printing photos every week, if I do dive into the weekly method I will probably still print photos once a month but it will change the way I put my spreads together. 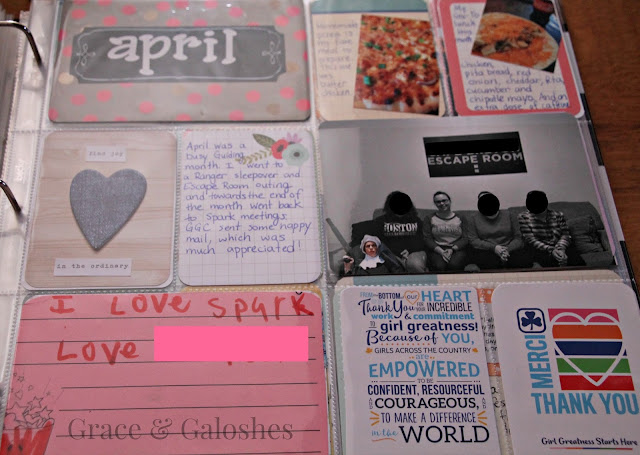 Organizing photos regularly. As often as possible I uploaded photos and got them organized. I kept a folder on my desktop labeled "PL - Month" and whenever I uploaded photos from my phone or SD card I looked through them and added the ones I thought I'd like to print for my album into the folder. At the end of the month I went through the folder and deleted some photos if I felt like there were too many. Occasionally I would go back through all of my photos and add more in but for the most part I had chosen plenty along the way. From there I roughly decided what photos I wanted which size. The easiest to choose were always the ones I wanted to keep 4x6 the others I just sort of filled in where needed. When I first started out this tutorial taught me everything I needed to know to resize photos using PicMonkey. Once that was done I put all the photos for the month on a jump drive and printed them off at Wal-Mart.

I had a system. Once I had my physical prints I roughed them into my album (like plumbing, only with more glitter). I put them into pockets and chose filler/journalling cards creating a bunch of rough drafts. Then once that was done I went back and worked on the individual cards/pages. Is this a time consuming way of doing things? Absolutely. Is there an easier way? Absolutely. But this is what worked for me.

I love Project Life. This system works for me, it might not work for you. Just like anything else if you don't enjoy doing something you're probably not going to keep doing it. It definitely took me some time to find my groove (honestly, it probably wasn't until camp season when I was doing things weekly that I really figured out my style).


One other thing that really helped was watching process videos on YouTube. I know they're not everyone's cup of tea but seeing what others are doing got the creative juices flowing and helped me figure out how to get started, because getting started is always the hardest part! My favourites are  Annie LuMaye, Froggie251 and Mercy Tiara.

Bumps Along The Road:

I fell behind. (Sort of.) As I mentioned before, when camp season hit I started a new album just for camp and documented after every session, because there is more than enough stuff to document on a weekly basis during the summer...sometimes I could have done a page each day. While I was focused on my camp album I neglected my monthly album. And once camp ended it left me figuring out how to fill in the gaps from May-September without repeating myself. I decided that I would use the leftover photos from the summer (Some PL-ers pre-plan pages and exactly what they need for each page, that's not my style so sometimes I end up with extra photos) and call it done. The end result of this is that for July and August I only have two pages, which sort of bugs me but it solved a problem so I went with it.

I'm kind of boring. I eluded to this above, but there were months (February & March) where I really didn't do a whole lot other than work. At that point I was even working overtime on Saturday and Sunday so I wasn't left with much to document. This is my biggest fear in switching to the weekly method. There might be weeks when the only photos I take are what I ate for supper one night, a screen shot of my phone and a handful of cat photos.

I went a little overboard. I really tried to start with just the essentials. An album, some page protectors and one core kit. Less than six months in I had three full core kits along with half a dozen mini kits plus all of my traditional scrapbook stuff. It was/is excessive. If I could do it over again I would have subscribed to a monthly kit and invested in one core kit or started the process earlier of cutting my 12x12 pages into Project Life sized cards. Eventually I will use the cards I have but I fully recognize that I didn't need that many to start.

One thing that is certain is I will 100% keep up with Project Life. I absolutely love the concept and how relatively easy it is. I love the finished product and will happily sing the praises of Project Life to anyone who will listen. Full Disclaimer: Project Life has no idea who I am, while I have given them a lot of my money over the past year they have given me nothing in return (other than great memory keeping products).