"Golden Rainbow Edition" make it sound like I spent a lot of time with unicorns this weekend but (unfortunately) that is not the case. My weekend centred around two main events, my grandparents 50th wedding anniversary and our Spark/Brownie Enrolment ceremony. Now is also a good time for a friendly reminder that it was not Thanksgiving here in Canada...we celebrate Thanksgiving in October.

Friday we were busy decorating the hall for the anniversary open house on Saturday. I also squeezed in a little bit of 'Black Friday' shopping on this side of the border. I took advantage of everything being half off at Old Navy and ordered a few more gifts (and a pair or pyjama pants feature kittens wearing boots for myself, because that is something I need in my life) and ordered some planner stickers on Etsy and cut myself off because I do not need anymore stickers.

Saturday was the open house and even though it was technically only two hours it was a busy two hours. When we counted the names in the guestbook afterwards over 100 people had signed, which I guess is what happens when you're married for 50 years. When everyone had left and the hall was cleaned up our immediate family went back to my grandparents to watch them open their cards before we all headed home. I was exhausted and even though I had originally planned to Skype with H. & R. I cancelled and went to bed early. 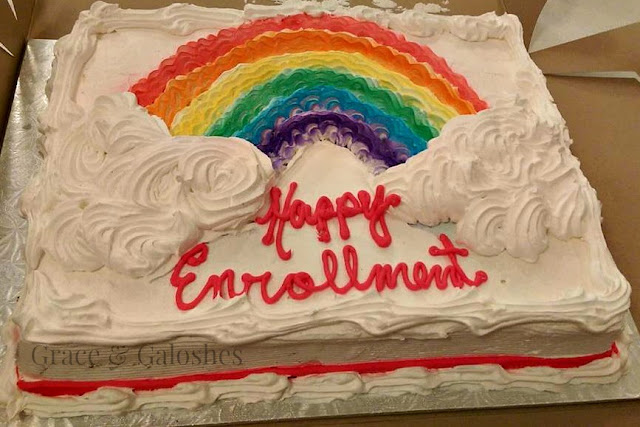 I had anticipated Sunday being a pretty low key day apart from Sparks/Brownies but as it turned out I went to the elementary school's Christmas Market in the morning and then to town with my grandmother, her friend and my cousin in the afternoon before Sparks/Brownies in the evening. It was a shorter meeting than usual but it was fun to have the girls' parents there to watch them officially become Sparks/Brownies and they were so excited to get their badges. Heck, I was excited to get some new crests for my camp blanket! We had cake & lemonade to celebrate and that was that.

I was home with plenty of time to Skype with H. & R. who filled me in on Gilmore Girls, I had been seeing some "Can't believe the ending!" posts on social media and wanted to know what the surprise ending was, but didn't actually care enough to look into on my own. I stayed up way past my usual bedtime getting calendars finished for my grandparents and uncle before I missed out on the Black Friday sale and watching Oak Island.

I'm cautiously optimistic that I will be able to finish the rest of my Christmas shopping this week. And get some cards ready to send out.

Linking up with B Loved Boston.
SaveSave
Posted by Donna at 9:36 am