Friday night I officially finished off my Project Life albums! 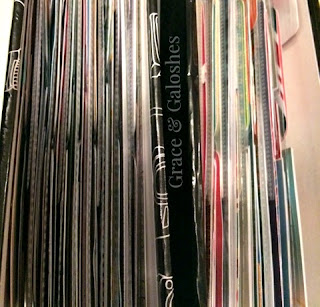 Look at all those finished pages!! I didn't do a final count but it's close to 100, which means there are thousands of photos printed and documented within those pages. I'm working on a post to share some of my favourite pages but my spread photography needs a lot of practice.

Saturday I started the morning off with coffee, a cinnamon roll and more work on my puzzle. 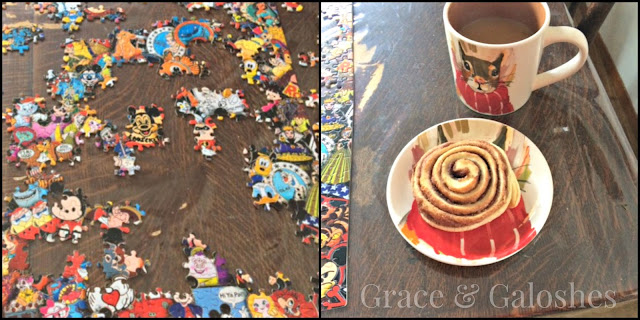 The trickiest part about the puzzle is the sheer number of Mickey Mouses, Cheshire Cats and Chip & Dales. Plus since it's a pile of trader pins everything is sort of upside down and sideways. The rest of the day Saturday I watched far too many episodes of 'Lock Up' on Netflix. I don't know why prison shows fascinate me so much, but they do. Except for Orange Is The New Black...after a few episodes of that I was thoroughly disturbed and stopped watching. The book was a good read though. Saturday night I continued with the Lock Up episodes and did some serious decluttering. I went though all of my scrapbooking stuff and got organized to start Project Life 2017. And tackled the photo boxes I had been dumping memorabilia in, anything that didn't get put into an album over the course of the year went in the trash. And the pile of ticket stubs and cards from J. also got tossed. A quick swiffer and I was ready to continue my 2017 streak of thankful thoughts and bedtime devotional reading.

We were supposed to get a storm Saturday night and into Sunday but we ended up only getting 20-25 cm of snow instead of the predicted 40+. Everything was cleaned up by the afternoon so I headed to my grandparents to take some photos. The waves were huge from the storm and if it wasn't so bitterly cold I would have spent a lot longer on the beach. 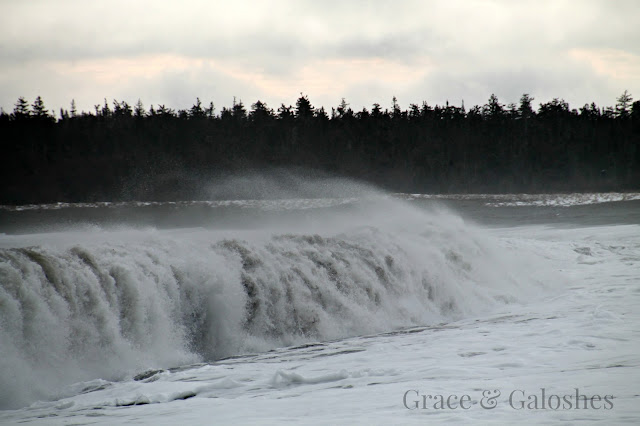 Just as I was starting to loose feeling in my fingers the sun started to poke out and the sky went from grey to blue. 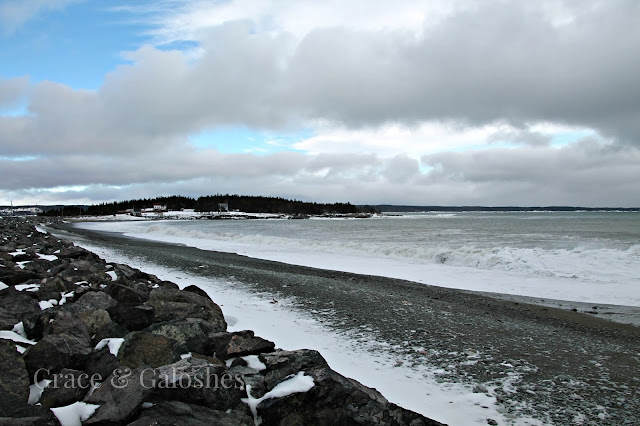 I would have stayed longer but there was coffee and more cinnamon rolls calling me from my grandparents' house. Not to mention kitty cuddles from their cat who was very interested in my wool socks. 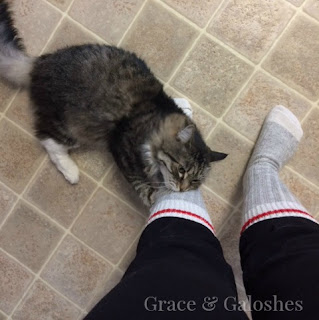 Last night I watched more Lock Up (Seriously, I'm glad there's only one season because it's starting to give me crazy dreams) and got ready for the week. Which consisted of choosing my word for the week, setting up my planner and planning out some blog posts. 2017 is still a winner in my books, let's hope the trend continues!

Linking up with B Loved Boston
Posted by Donna at 9:56 am