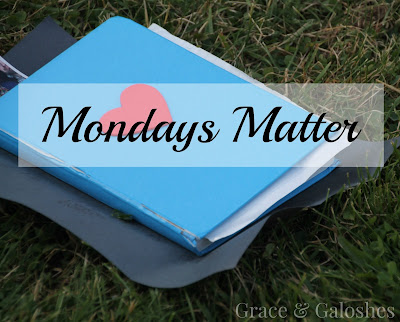 As always let's start with some of my recent favourite reads. Renee from Mulling Over My Morning Coffee wrote this short devotional about how things don't always go according to our plan. Elissa wrote about her choice to take a nap. And Callie shared her thoughts about old school blogging.

I'm on my third Word of the Week and I love switching it up every week. My original plan was to wait until I had made it through at least four words but I'm only starting the third week and I'm already itching to share. So far I've used Abide & Flow and this week I'm working on Spark.

Even though this is the first Valentine's Day in two years that I've been single I am the most excited about celebrating. Mostly because I get to celebrate with twenty 5-8 year olds! I found the cutest fun patches online and ordered one for each of them (and the other leaders). My plan is to make little tags to serve as Valentines and they will be adorable. Plus, mailing Valentine's Day cards because that's a fun thing to do too. Maybe it's a consumer holiday but for someone who's love language (aside from chips & dip) involves words of affirmation Valentine's is my jam.

For as long as I can remember I've been labeled as 'shy'. And it's only in the last few years that I've kind of embraced that label. BBC published this article about Celebrating Shyness  and it completely resonated with me. I think it's worth a read regardless of whether you consider yourself shy or not. I think it's hard for people who aren't shy to understand shy doesn't mean rude or standoffish. And I also think it's important to designate the difference between being shy and having seriously severe social anxiety.

It also seems fitting to share my favourite Obama article, Obama After Dark. I happened to read this article while I was at camp and I related to so much of it, especially the no good decisions part. There are days when selling plain white t-shirts in size medium on a beach in Hawaii sounds like a viable career choice.

I'm still in the waiting phase of things unfolding with the job search. And realistically it will probably be the end of January before I have a solid plan, but at least the end is (hopefully) in sight. With that in mind my quote of the week is from the amazing Julia Child. I assume she was talking about food, but I think the sentiment is transferable, especially after last week's Patience Make Pancakes revelation.