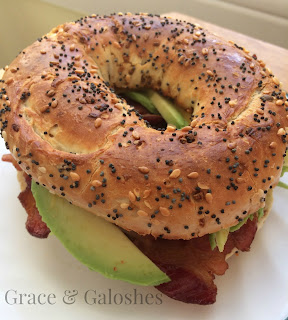 I mentioned in my What's Up Wednesday post that I had finally given the avocado for breakfast trend a try. I wouldn't consider it a life changing experience but I have been enjoying this newly discovered breakfast. It consists of an everything bagel, bacon, cheddar cheese and avocado. Breakfast is my least favourite meal of the day but I attempt to eat it because apparently it's important. I probably have a success rate of two or three times a week. Maybe someday I'll be a breakfast enthusiast.

{two}
I feel a little obligated to include an update on the job front, especially since it's positive. I've been interviewing for a position all month (not even exaggerating). Earlier this week they officially offered me the position. I'm meeting with them on Monday to discuss details. Hopefully everything will come together and I will finally be done with job search stress. (And can move on to moving & starting a new job stress!) 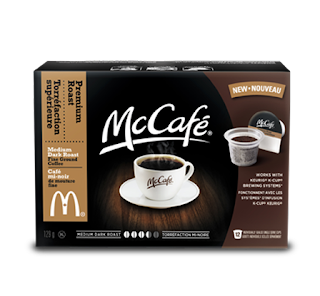 It has been extra dreary outside this week. The weather has shifted between snow, rain & freezing rain with lots of high wind. Coffee has become a top of my favourites list this week. When I first got the Keurig I was much more adventurous with my coffee choices. Now I usually stick to McDonald's brand with the occasional Starbucks or VanHoutte thrown in depending what's on sale. What are your favourite coffee pods? I think choosing McDonald's Coffee over Tim Horton's coffee might make me a bad Canadian but I think I make up for it with my love of Ketchup Chips.

I spent an entire afternoon this week sorting through my stash of scrapbook paper. I got rid of anything that was too tiny to ever be useful. Since I've converted to Project Life my 12x12 papers were essentially useless, so I cut a bunch down to 4x6 which will make it much easier to incorporate them into my PL albums. I need to come up with some creative ways to use PL cards because I have way too many. I'm thinking I will use some as Valentine's Day cards and search Pinterest for more information.

I may not be interested in the antics of The Bachelor but ask me about almost any TLC show and I will happily have an in depth discussion. Whether it's the latest news from the Brown family or the adorableness of the Busby's, the fascinating psychology behind My 600 lb Life I can carry on a conversation. I have abandoned the Duggar's, but only sort of. I don't watch the show but I read up on their happenings from time to time. I like to think I'm not alone in my love of TLC, but I'm also pretty certain most folks choose to ignore the world of TLC.