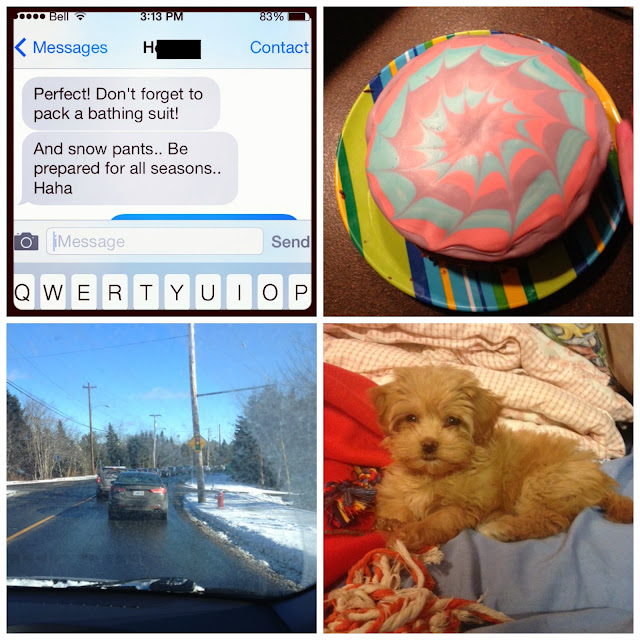 Thursday night as I was packing I got the above messages from H. She has a hot tub at her house which we planned on putting to good use during the weekend hence the bathing suit. And with a major snow storm in the forecast we thought we might have some outdoor winter fun, so I packed my snowsuit too. I was ready for anything.

Friday I headed to the City as planned and for the most part the roads were in pretty good shape! I got to the city by early afternoon which was perfect timing since H. & I had a chance to put some finishing touches on R.'s birthday present! I thought I got a picture of it but apparently I didn't. It was a Pinterest project made from a bulletin board with a photo of the 3 of us in the middle and then we cut out 24 circles from pretty paper and on each of them wrote a reason why we love R. (she turned 24 this weekend).

We went out to supper with a few more friends to celebrate R.'s birthday at a cozy little restaurant downtown. I'd never been before but I ordered the Santa Fe Chicken Burger and it was super yummy! After dinner H., R. & I headed back to H.'s for wine & birthday cake! H. made the amazing tie-dye cake! The cake itself was a layer of chocolate cake, a layer of graham cracker cake and a layer or marshmallow fluff icing, I'm not sure where she found the recipe but it was extremely impressive! After cake & wine we spent the rest of the evening catching up and planning the rest of our weekend.

Saturday we headed to the mall, along with everyone else in the province based on the traffic that we encountered on our way there. We kept trying to take a picture but we couldn't get a good angle to truly capture the ridiculousness. Once we got to the mall we continued with the ridiculousness when we headed to the grand opening of Forever 21. So much crazy. We bought a few things there but after the experience we'd had enough of the mall so we headed back to H.'s for our fun evening plans!

Two other girls that worked at camp this summer came over Saturday night and the five of us spent too much time in the hot tub and drank too much wine in the process. We were still in the hot tub when the snow storm started which was a pretty neat experience!

Sunday the snow storm was in full force so we spend the whole day bundled up indoors and recovering from Saturday night's wine & hot tubbing.

Monday the roads were still pretty sketchy to make the 5 hour drive home so the three of us spent an extra day together and tackled the mall once again! This time we powered up before hand with pizza & garlic fingers and then headed out. Our second trip was much more successful and enjoyable and we all managed to get a bunch of Christmas shopping done. Yesterday evening we played with H.'s new puppy. She is the sweetest and even though I'm not much of a small dog lover, it's hard not to love that little ball of fluff!

I was up early this morning and set out for the drive home. The roads were still pretty sketchy in some places but I made it home safe & sound! I am now going to spend the rest of the night reading the 166 unread posts on my Bloglovin' feed and replying to a bunch of e-mails that have been neglected over the past 4.5 days!