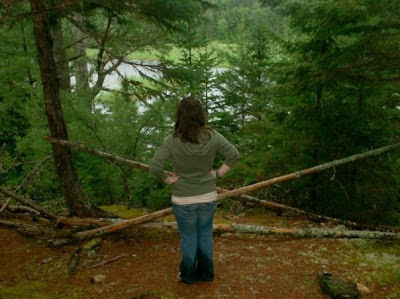 This is my favourite picture of myself. There's nothing special about the photo itself, but it's all about the moment. I didn't know the photo was being taken until I was tagged in it on Facebook a few days later. In this moment I was standing at the Vespers Spot at the camp I grew up at, something I'm sure I did hundreds, maybe thousands of times over the 10 years I was a camper and volunteer there. What makes this moment important is it was the last time I would ever stand there. Due to a series of unfortunate events that started with the person who formally owned the land camp was on passing away without a will and ended with some relative of his voiding the lease and deciding to sell the land. Yesterday I didn't really talk about specific struggles, but this photo captures what has been one of the hardest things I've had to deal with. I have no idea why God would make/let that chain of events happen, especially to a place where so many campers, counsellors and volunteers found God among the trees and heard Him most clearly standing in the field. But He did. And now what used to be my favourite place on earth, the place where I learned the most about myself and life is in the process of becoming a subdivision.

It's been five years since this all happened and it still hurts. Every time I drive by the sign advertising lots for sale I either tear up or am overcome with anger. For the sake of my sanity I have to believe with all my heart that there is an amazing reason for why this happened, I don't know it yet, and maybe I never will, but there's a reason. We tried to run the camp program by renting another camp for a few weeks each summer but two years ago the committee made the decision to end that as well. And that hurts too. I miss it every single day, and although there I things I love about my new/current camp, it's not the same.

I am thankful that I did get 10 amazing years there. Without camp I have no idea what I'd be doing right now, camp is so much a part of who I am, and that particularly camp will always remain one of the most important foundations of my life.
Posted by Donna at 11:57 am