I spent this weekend at Brownie Camp with my five favourite Brownies. I am such a proud Brown Owl, I feel like I could brag about how awesome they did for days. In the beginning none of them wanted anything to do with camp but then all five of them decided they would give it another try. (I'm not exactly sure what went down at last year's Brownie Camp but my girls did not have a good time.) Some of the Moms were pretty nervous too so I had given them my number and told them to feel free to text to check in to see how things were going. As I was getting the girls ready for bed I got a text from a Mom checking in and when I let her know what was happening (girls were getting PJs on, getting facials and then going to bed) I got the sweetest message back. 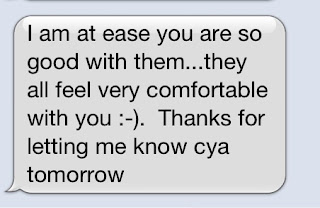 Little things like that make me feel so much better about life and I consider them a reassurance that I am doing what I'm supposed to be doing in life.

The second (and maybe the most important) highlight of my weekend can be summed up in these 3 pictures. 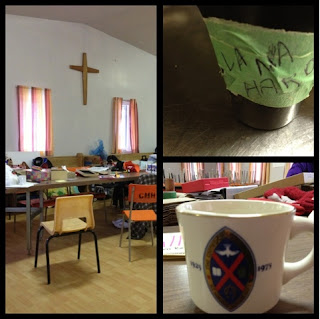 For a little back story the camp that we had rented for Brownie Camp was one that I had been at before, the last time about 6 years ago when "my" camp rented it for a few weeks right after we lost our camp. So before I went I selfishly/secretly hoped and prayed for some sort of 'sign' that we had been there before. That 'my' camp had existed and in some small way continues to exist. I wasn't really expecting to find anything, I mean it has been six years. And if I did find anything I didn't expected it to either be super ambiguous (oh, I bet this random cup in the cupboard was "ours"). And I was proven wrong. The first thing I 'found' was a piece of painters tape with the name of a former counsellor/director written on it and taped to a griddle in the kitchen. I can guarantee that piece of tape has been there for six years. And then I found a mug that was clearly a relic. And the cross just served as a reminder that I love camp, specifically I love camp ministry.

I left camp Sunday afternoon feeling so much better about life.

And best of all with a new "Five Year Plan" taking shape in my head. And I have no idea how it will unfold, but it's there and it wasn't before and it's a feeling that can't be explained with words.