Crafting Up A Storm


The last two days it has snowed non-stop, resulting in 41 cm of snow and making me a little shack wacky. I took advantage of all the downtime to get Valentine's Day treat bags made for my Brownies. This was my first real project with my Cricut since I got it at Christmas, I've played around with it lots but this is the first time my creations have been distributed to others. I'm pretty happy with the way they turned out, I cut the frogs & saying from the Create-A-Critter 2 cartridge and the only difficulty I had was the glue stick I was using was too big. I definitely need to invest in a smaller one for assembling smaller cuts. 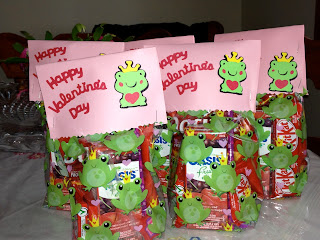 I spent the afternoon painting puzzle pieces for our Valentine's Day craft but they're still drying. It's one of those Pinterest projects that I saw, thought was cute and then forgot to pin. So I don't have any actual instructions to go by, fingers crossed it will all work out. It's still storming outside which means it's also possible there won't be a Brownie meeting tomorrow if school is cancelled. In which case we'll just have to celebrate a little later on in the month!