Along with the end of the year comes the invitation to reflect and compile all that reflection into lists. And since there are few things I find as comforting as lists it's the perfect motivation to dust off the keyboard (literally) and document a few of my favourite things from 2017.

Book: You Are A Badass - Jen Sincero. I loved this book. I've read a lot of self-help type books and things that generally fall into the 'self-help' category but this one was different. The information was familiar but it was presented in a way that made it fun and friendly. A friend recommended it to me and then I recommended it to another friend and now I have this little pod of people who are all equally as interested in the power of positive thinking and encouragement.

Show: The Ranch I came across this show in July and it quickly became a favourite. There's something about the way it balances humour and drama, it feels real and not too ridiculous. Of course, some of it is kind of ridiculous but in the same way real life is ridiculous. There's a lot of swearing, which generally turns me off of a movie/show but it works in this context. I like it so much that I'm not even binge watching the most recent season because I want to savour it!

Move: The Fundamentals of Caring This is a wimpy favourite...I'm not even sure I watched this movie this year or towards the end of last year. Either way I don't watch a lot of movies and when I do watch movies I watch the same ones. I'm including it because it was a decent movie and every other movie I watched this year I either didn't really like or was made in the 90s.

Song: I'll Name the Dogs - Blake Shelton A few summers ago a friend consistently pointed out that country songs are ridiculous and when I first heard this song I thought about how much P. would dislike it and how much I like it. It is silly and it's also incredibly sweet and I listen to it on repeat at least once a day.

Podcast: The Lively Show This started as a one off listening to an episode about work/life balance and I really liked what she had to say so I kept listening. I haven't made it through the entire library of shows but I'm slowly making my way through them and keeping up with recent episodes. It might be a little out there for some people and sometimes it's a little too out there for me but it is really interesting and usually motivating! 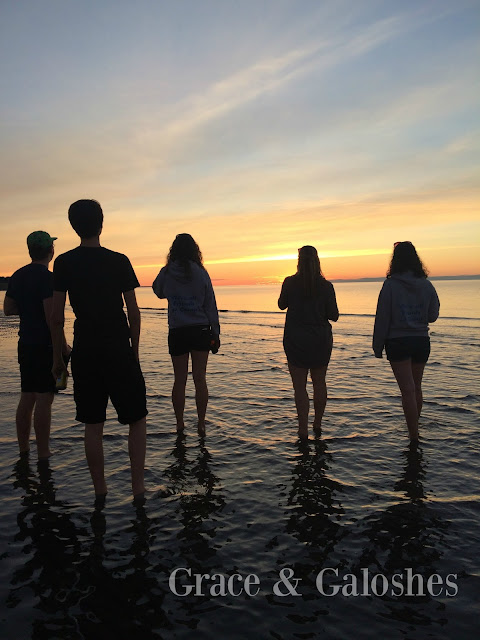 Photo/Moment: I had a lot of feelings during/after visiting camp in the summer but afterwards a group of us went to a friend's cottage and I snapped this photo. It illustrates a whole lot of my favourite things from people to places and is the perfect reminder that life is weird - and it always works out. I'm immensely grateful for these people and the place that brought us together even though it wasn't something I planned or wanted.

Usually people choose a word at the beginning of the year to set the tone this year I've been thinking about a word to sum up all the events of 2017 and I've come up with disorientating. On paper and in practice life was pretty good and at the same time totally not what I envisioned. And maybe that's not a bad thing but time will tell.

Linking up with Momfessionals.
Posted by Donna at 11:44 am