There's something about blogging on Monday that feels extra intimidating. Almost as though there is an unspoken rule in blogland that in order to blog on Monday you must have tales of weekend trips to  small Texas towns, photos of gourmet meals and craft beer or at the very least photos of you and your adorable children in pyjamas and then their Sunday best. I don't have any of those things to share, but I'm going to blog anyway. 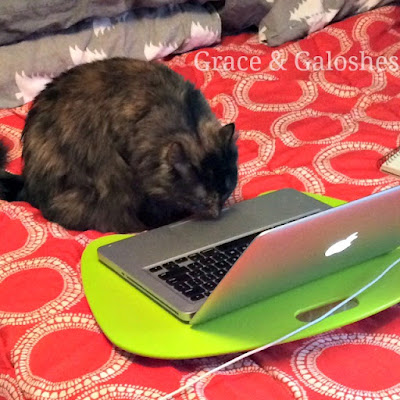 I spent this weekend doing the same thing I've been doing every weekend since the end of February - working. Which in many ways is insane and on Sunday morning the last thing I wanted to do was spend another 8 hours at my desk, but I did it. In the beginning it was the make hay when the sunshine category of motivation. This past week I did find out that I will be extended past March 31st, but it's still unclear how much past. As per usual, there are rumours swirling that our end date will be anywhere from April 17 to April 27. It's nice to know I'll be working for another month, it would be even nicer to know exactly when we'll be finished. I'm still hoping to visit H. before camp season but she only has a week off at the end of April so depending on my finish date it may not work out.

When I finished work yesterday I quickly ran to the grocery store and bought groceries for the week. I need to get back on the eating meals train. It's a fact of life that I am a happier (and healthier) person when I plan my meals, prep stuff for the week ahead and eat real meals. Since overtime has been eating up my weekends I've been eating a lot of yogurt and goldfish crackers....not ideal. I had an early Easter dinner yesterday with J.'s family because they're travelling next week but once I got home I found my kitchen groove and organized/cooked things to make steak fajitas, bruschetta, quinoa & veggies and made a big batch of trail mix to snack on all week. Full disclosure, my "made trail mix" what I'm saying is I mixed a bag of dried fruit with some nuts and seeds then called it a day.

I then proceeded to sleep for 10 hours and woke up on this Monday morning ready to start the week. Because I kind of love Mondays. I like the possibility of the week ahead and the feeling of having everything in order. Meals in the fridge, outfits hung in the closet...Mondays make my Type A soul burst with happiness.

So on that note I'm off to gather my tupperware containers, throw on an outfit and start the week. Hoping your Monday is equally as enjoyable!